The Revelation of Jesus Christ

which God gave him

to show his bond-servants the things which must Shortly take place;

and he sent it and communicated it

to his bond-servant John

who bore witness to the word of God

and to the testimony of Jesus Christ

even to all that he saw.

Blessed is he who reads

and those who hear

the words of this prophecy

and heed the things

which are written in it

For The Time Is Near

to the seven churches that are in Asia

Grace to you and peace

From him who is

and who is to come

and from the seven spirits

who are before his throne

and from Jesus Christ

the first born of the dead

and the ruler of kings on earth

To him who loves us

and released us from our sins

and he has made us a kingdom

to his God and father

To him be the glory and the dominion 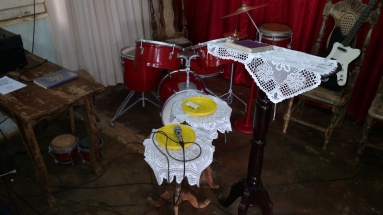 and fellow partaker in the tribulation

and kingdom and perseverance

which are in Jesus

was on the island called Patmos

because of the word of God

and the testimony of Jesus

One can really discern the rhythm is this reading, especially when it is written out in this manner. Let me ask a question, when Revelation is broken down into rhythmic, bite-sized chunks such as this, is memorization a plausible possibility? The rhythm in the writing reveals (revelation) more than what we see on the surface, and how appropriate. Many modern scholars, and even some close contemporaries of John, argue that the John who wrote the book of Revelation  was not “the beloved disciple” who wrote the Gospel of John and the three epistles. Claims that the grammar are different between the book of Revelation and these other works are correct, nevertheless, they are erroneous to think that this excludes John from writing them all. The problem with scholars is the same problem we have, they think too much. When one keeps it simple, the simple answer usually prevails.

Why is the grammar different in Revelation than that of John’s gospel and epistles? The rhythm reveals that to us. If context is the king, genre is his General. When we read Revelation, we neglect the genre and take it literally, like it’s the owner’s manual to a 2007 Toyota Corolla. Imagine if a manual read as follows: The Toyota Corolla, her tail-lights, so red, blazing with every application of the brake pedal, like a choir in dissonance, yet ultimately harmonious, as the sun and moon rule over their allotted time so also the tail-lights–dim for driving and bright as a dragon’s flame when braking. The antithesis of an owner’s manual, that reads like a 1980’s romance novel, is claiming that an apocalyptic book could not be written by someone who wrote a few letters and a historical book, about the life of another, because the grammar would be the same. Let the rhythm move you.

If you are not convinced that I am correct and the scholars are wrong (Romans 1:22), as they harp on what appears to be incorrect grammar, which is actually used consistently within the genre, let’s look at the vocabulary. What one word would one say is a very “Johannine” word? A word the apostle John used repeatedly and is a rarely used word by other Biblical writers? Do you need more help with the WORD? Very well done. WORD; In revelation, in the very second verse, John, as the author calls himself, refers to the word of God. John says he himself bore witness to the word of God and the testimony of Jesus, even to all he saw. The second very Johannine “W” word is witness. John testifies to being a witness of Jesus–there was a John present during his ministry I’m told. John claims to have been a witness to the “word of God,” he claims to have seen it first hand. John wrote in his account of the life of Jesus that “The word became flesh and dwelt among us.” John also ended his account of the life of Jesus in this way, “This is the disciple who bears witness of these things and wrote these things and we know that his witness is true.” in 3rd John 1:12 John writes, “…and you know that our witness is true.” Mashup time! John 1:1 + 1 John 1:1-2 + Revelation 1:2: “In the beginning was the word and the word was with God and the word was God.” “What was from the beginning, what we have heard, what we have seen with our eyes, what we beheld and our hands handled, concerning the word of life, and the life was manifested, and we have seen and bear witness and proclaim to you the eternal life, which was with the father and was manifest to us.” “Who bore witness to the word of God and to the testimony of Jesus Christ, even to all that he saw.” It certainly sounds like the same author to me! This is not an exhaustive list, many other example exist.

Another thing to consider is that a sub-genre of Revelation is that of an epistle; seven of them. One may argue that these epistles are grammatically and contextually different from John’s other three epistles, but consider: “And to the angel of the church of Philadelphia write:” and so forth. I’m sure that although in the spirit, John’s personality and vernacular would be revealed in his epistles but to the seven churches, he was writing a dictation, in all likelihood,  verbatim.

John, the rebel and revelation recorder, our brother. The fact is, that this rebel banished to Patmos, clearly wanted us to know who he was. In verse two of Revelation verse one, we learn that this John is a superstar. He knew Jesus, personally, he was a witness to all that happened in his ministry, his death, his resurrection, he was there! However, in verse nine we read, “I, John, your brother and fellow partaker in the tribulation and kingdom and perseverance which are in Jesus, was on the Island called Patmos, because of the word of God and the testimony of Jesus.” Wow, the rebel superstar puts himself humbly on the same level as his audience!”

Why spend this much time establishing that John, the beloved, the apostle, was the recorder of Revelation? First, I think it is because John went to great lengths to tell his audience who he was. Second, is that in the CAGED method (read previous post to find out more about the caged method), one must consider the context; author, audience, aspiration; genre; examples in the rest of scripture; and then divide the word. We need to know who John was, to whom he was writing (the seven churches), and his aspirations in writing. Because of John’s great authority, and greater humility, we can read Revelation with confidence. We have a redeeming God, revealing his words to a reputable recorder.