“And His head and His hair were white

and His eyes were like a flame of fire”

Jesus Christ came to Earth over 2000 years ago, as a baby boy, to live the perfect life and accomplish all that Israel could not, fulfilling the requirements of God’s law, and then die, on a cross, bearing our sins and guilt. And he did it, Hallelujah! Mission Accomplished! I am thankful to be living on this side of the cross where the dividing wall has been torn down and all have access to Jesus. Yet living on the west side of the cross has, what I consider, a higher mandate than those who lived on the East side of the cross. That’s right, there’s a new mission. Let’s take our vitamins and bask in the glory of the long-since risen savior.

“…And His head and His hair were white like white wool, like snow; and His eyes were like a flame of fire; and His feet were like burnished bronze, when it has been caused to glow in a furnace, and His voice was like the sound of many waters. And in His right hand He held seven stars; and out of His mouth came a sharp two-edged sword; and His face was like the sun shining in its strength. And when I saw Him, I fell at His feet as a dead man. And He laid His right hand upon me, saying, “Do not be afraid; I am the first and the last, and the living One; and I was dead, and behold, I am alive forevermore, and I have the keys of death and of Hades. “Write therefore the things which you have seen, and the things which are, and the things which shall take place after these things. “As for the mystery of the seven stars which you saw in My right hand, and the seven golden lampstands: the seven stars are the angels of the seven churches, and the seven lampstands are the seven churches.”

“His head and his hair were white…” While this is certainly imagery, there is no reason to not take it somewhat literally. That is John truly saw his white hair. Impressed enough by it, he then uses simile to highlight the “whiteness” of his hair: “Like white wool; Like snow.” That’s some good literature there. Quickly, concisely and beautifully, John illumines the fact that Jesus is old and wise. That sounds funny, doesn’t it? We know Jesus is not constricted by things such as time and that he is eternal and doesn’t age. Yet he presents himself as old and wise, in contradiction to our feelings. We usually think of Jesus as a young man, and for a month out of the year, a baby. Honestly, how often do we think of him as the elder of elders. I think of John 8 “Abraham saw my day and was glad.” The Pharisees we’re baffled at this statement and said “you’re not 50 years old!” They didn’t understand. Actually, they eventually understood because they picked up stones to stone him for blasphemy. What they didn’t do was believe.

That made me think. Do I, the one who is intolerant to our Christmas attitudes of the perpetual baby in the manger, really treat Jesus Christ as the elder priest and king? Do I submit to the Alpha and Omega, the beginning of all creation, the King of Kings and Lord of Lords? Perhaps that is the exact reason Jesus chose to present himself in this manner to John. I believe in an earlier date for the book of Revelation. Though this text, if taken to literal extremes, would indicate the converse, Jesus has gotten old. Nevertheless, to me, it seems to have an intrinsic shock value. That is to say, if Revelation was written in the mid-first century, the fact that Jesus is old would have been a surprise to John and the readers. Again, I truly believe that this is more than intentional. Jesus is putting his rule, his wisdom, his power and all of his other eternal characteristics on clear display. Yes, he was a baby, a child, and died as a young man, yet now he reigns as our elder statesman. The following descriptions codify this:

“His eyes were like a flame of fire; and His feet were like burnished bronze, when it has been caused to glow in a furnace, and His voice was like the sound of many waters.” More Simile; Jesus doesn’t have literal flames shooting from his eyes, it is imagery. In Daniel 7,8, and certainly 10, we see similar imagery. We have the ability to jump ahead in the text and to read: “And to the angel of the church in Thyatira write: The Son of God, who has eyes like a flame of fire, and His feet are like burnished bronze, says this: ‘I know your deeds…'” although the book was written to be read chronologically, though not taken, and progressively. Much of the imagery will be revealed as to its interpretation. In other words, we should let the mystery unfold progressively. As we read we should take Vitamin E, and remember our Old Testament tutor, while expecting further revelation from the text. For instance; we know John saw seven golden lampstands, but until now we had yet to discover the meaning of this imagery. However, in the last verse of today’s text, Jesus tells John that, “the seven lampstands are the seven churches.” Again, it’s imagery. When trying to teach teenagers the book of Revelation, I put a picture of my daughter and my niece on the white-board and said, “this is my daughter and this is my niece. Are there any objections to this statement?” There were none. In response to the silence I screeched, “Wrong! This is a picture of my daughter and my niece. It is a representation of their respective likenesses.” I could start an argument concerning transubstantiation here but I will let it go, for now–mostly. “This IS my body,” Martin Luther is reported to have carved into a table while debating the subject. Don’t get me wrong, I believe in the real presence of Christ during communion and think we take it in an unworthy manner most times. I hold communion high and holy, but I do not think the elements are literally changed to his body and blood. Like my daughter’s picture, it is a representation of his body and blood. In the same way that clouds represent his presence and judgement, the white hair represents his eldership and the seven golden lampstands represent the seven churches.

His eyes of fire also harken back to the Old Testament. Further in our text also we see (irony intended​), that the eyes aflame represent his omiscience. He sees all. Like in my first missive on this site, The Closed Door, there is a picture of a door with no walls. The imagery I abysmally attempted to portray, was that God may be knocking at our door but there are no walls. He sees all. 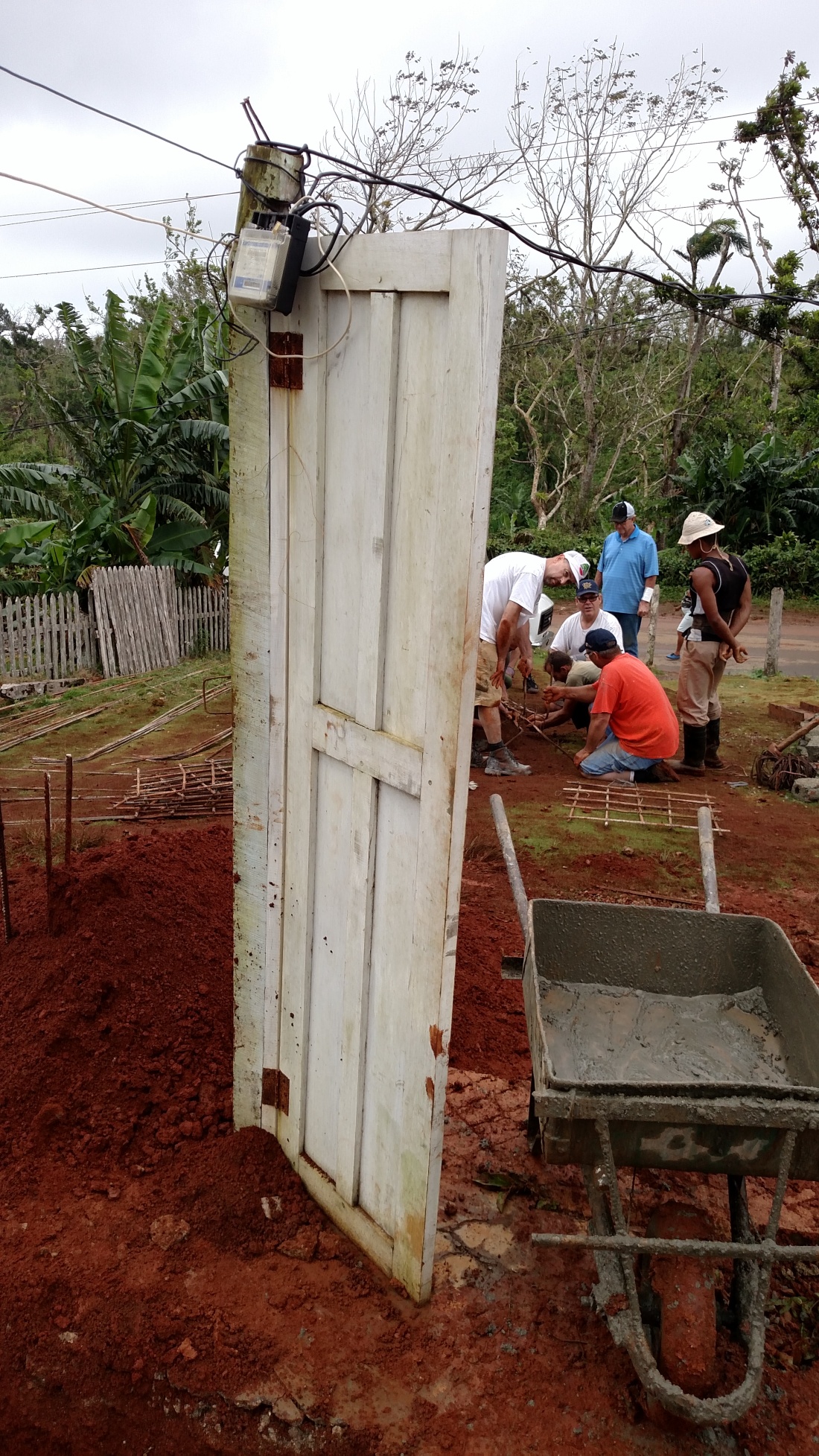 However, as I have stated, we don’t need to know exactly what the imagery represents here and now. As we read Revelation, these images unfold progressively, right before our eyes. While we read, we remember: these images and our Old Testament tutor.

One problem though: if we’re honest, myself more than included (I was the case study in attention deficit disorder; I tend to stare blankly and retreat into my mind to anything else but the task at hand), we don’t know our Old Testament and don’t focus on Scripture interpretating Scripture. Even in Revelation 1, we may read the first half of the chapter one day, then several days to never later, read the second half, wherein​ Jesus tells us specifically what some of the imagery represents. While the Old Testament is our tutor, much of Revelation is interpreted through Revelation. The problem isn’t difficult imagery, it’s our imaginations and poor attention span. We approach the Bible like the owners manual to a 2007 Toyota Corolla. We take it literally and keep it CAGED. For more on this read, An Aside, from my home page.

As we read through Revelation, the imagery will become self-evident if we adhere to the CAGED method. But more importantly, we must put aside our presuppositions and preconceived notions. We have to read it fresh and new. We have to put ourselves in the shoes of the early church and remove the clothing of contemporary consciousness. We can’t look for things such as a tribulation, a rapture or the like. We have to read it again for the first time. If things such as a rapture are in Revelation, we’ll find it. But if it’s not, I hope we’ll be brave enough to admit it.  We must check our baggage at the door. If one reads Revelation looking for a pre-tribulation rapture, because of preconceived notions one will most likely find it. Actually, truthfully, they won’t–it’s simply not there (And that is the argument–the church is missing after chapter 3. That, and the exhortation to the church in Philadelphia where Jesus says he’ll keep them from the hour of testing. Based on the rest of the context, that’s a very weak argument, especially if we ask why only Philadelphia?).

So join me with fresh eyes, clean clothes that are not contemporary, and First century footwear, as we seek to see what John and the churches saw. Don’t look out your window and interpret Revelation to what you see, see what they saw!